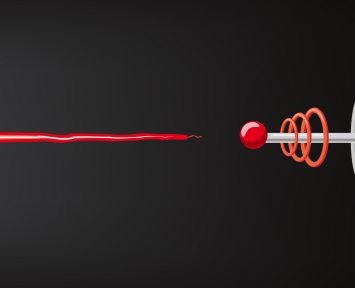 A Chinese device called the ZKZM-500 laser assault rifle is purported to emit a high-power laser beam that can incinerate you from over a mile away.

In 2015, the Chinese government dedicated 2 billion yuan to researching and developing compact laser devices of this kind, which it said would be used by law enforcement to prevent illegal protests. Because of the device’s range and the fact that the beam is invisible to the human eye, it could also be used to covertly sabotage equipment or light buildings on fire.

According to the Xi’an Institute of Optics and Precision Mechanics, which is part of the Chinese Academy of Sciences, the laser assault rifle has been built and tested. The prototype weighs just 7 pounds and costs $15,000.

If these claims are true, it would represent a huge leap forward in so-called “directed energy” technology — basically the weaponization of lasers. Up until this point, the bulky infrastructure and huge energy demands of directed energy weapons have rendered them unfeasible.

Which is why some are skeptical about the Chinese claims…

The images released of the ZKZM-500 laser assault rifle look similar to images of a half-dozen portable laser weapons released by the People’s Liberation Army over the last 15 years.

And while the South China Morning Post, the newspaper that broke the story, has played up its ability to “carbonize” people, international law strictly bans any such system that can deliberately cause permanent blindness.

To that end, the Chinese government has made no such claims about the ZKZM-500, and has insisted that it’s effects are temporary and cause no permanent damage.

According to Phil Broughton, who works on radiation safety at the University of California at Berkeley and holds a certification from the Board of Laser Safety, the ZKZM-500 is likely as hazardous to the operator as any potential opponent.

“To make this work, you need a serious battery pack, some even more serious capacitors, optics that can take all this without turning back into sand at these energy densities, and rugged enough that you can treat this like military hardware,” Broughton said.

In the end, the capabilities of the ZKZM-500 may be closer in nature to a non-lethal crowd control tool developed years ago by the U.S. military — the Active Denial System, which uses an uncomfortably high but less-than “carbonizing” dose of microwave rays to ‘zap’ targets.

Some entertaining video of that system in use below.

For over 37 years, IRD Glass has done things that virtually no one else has with glass and ceramics, and that’s largely because we incorporate lean principles into the R&D process and use a unique cell-based manufacturing approach with small, dedicated teams working on individual client projects.