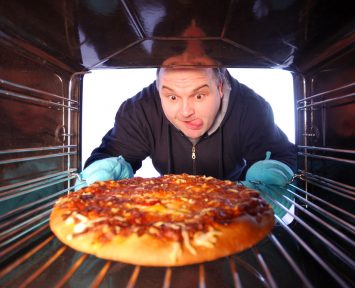 The promise of nuclear power is enormous.

It produces energy via nuclear fission rather than chemical burning, generating a huge amount of electricity while putting zero carbon into the atmosphere. It works constantly. On average, nuclear power plants produce energy 336 of 365 days a year, the off days being devoted to maintenance.

But there are obvious downsides, chief among them being figuring out what to do with all that nuclear waste. Uranium and plutonium have a half life of 24,000 years, meaning it takes 24,000 years for the level of radioactivity to fall by half.

In Europe, where one quarter of all power comes from nuclear energy, finding places to safely store nuclear waste has become a huge challenge. Which is why nuclear scientists paid such close attention when physicist Gérard Mourou said this in his wide-ranging Nobel Prize acceptance speech:

Lasers could cut the lifespan of nuclear waste from tends of thousands of years to 30 minutes.

That’s like…how long it takes to make a frozen pizza. Mourou, along with Donna Strickland, split the award for their development of Chirped Pulse Amplification, which produces high-intensity, super-short optical pulses that pack an extreme amount of power.

Though the technology was meant to be used to make hyper accurate cuts in medical and industrial applications, Mourou thinks it could also be used to neutralize nuclear waste, a possibility he’s exploring with Toshiki Tajima of UC Irvine.

Mourou said to The Conversation:

“Take the nucleus of an atom. It is made up of protons and neutrons. If we add or take away a neutron, it changes absolutely everything. It is no longer the same atom, and its properties will completely change. The lifespan of nuclear waste is fundamentally changed, and we could cut this from a million years to 30 minutes!”

He added that it would be “10 or 15 years” before they have something they can demonstrate, but considering they already have the ability to irradiate large quantities of material with one pulse, there’s no reason they can’t scale it up.

We work with all kinds of materials, from sapphire, doped glass and fused silica to chalcogenides. We use specific substrates and coatings to provide exceptional performance and to adhere to our customers’ exact demands.

IRD will certify the performance and specifications with whatever data you require.