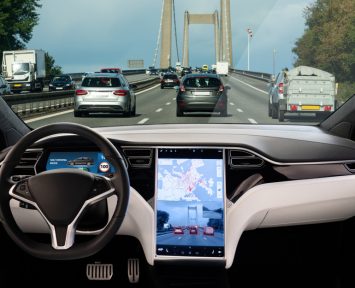 Elon Musk, the madman-genius-engineer behind Palo Alto-based automaker Tesla, made big waves when he declared that “Anyone relying on lidar [for self-driving cars] is doomed. Doomed.”

Tesla’s current vehicles use radar, GPS, maps, ultrasonic sensors and more to “see” the world around them. Now it looks like they’ve found a use for lasers after all. But it isn’t navigation or crash avoidance.

Tesla’s patent is for a “laser cleaning process” that would ensure that the cameras used for the Autopilot driver-assist system remain clean and have a clear view of the road.

The system would use regular, old cameras to detect debris on the windshield, side mirrors or camera lenses and then irradiate the debris with carefully calibrated pulsed lasers. The glass protecting the cameras and the windshield would need to be coated with a layer of indium tin oxide to protect the optical components on the other side of the glass and, of course, the human occupants.

Zap clean your solar panels too!

The process could also be used to clean the surface of Tesla’s solar panels — which makes sense. Anything blocking the surface of a solar cell reduces the panel’s effectiveness. Tesla’s solar roofs would require frequent trips to the roof with rags and windex without an automated system like the one described.

Good question. Those who have looked at it say the science behind the laser cleaning process is sound.

Carnegie Mellon famously produced a robot that uses a similar laser to strip the paint off fighter jets, saving the Air Force from using chemical paint removers. Researchers have begun exploring the use of lasers to clean stained glass and restore priceless paintings.

Let’s put it like this. If we can go into your eyes and fix them with femtosecond lasers, we can probably clean windshields.

We work with all kinds of materials, from sapphire, doped glass and fused silica to chalcogenides. We use specific substrates and coatings to provide exceptional performance and to adhere to our customers’ exact demands.

IRD will certify the performance and specifications with whatever data you require.